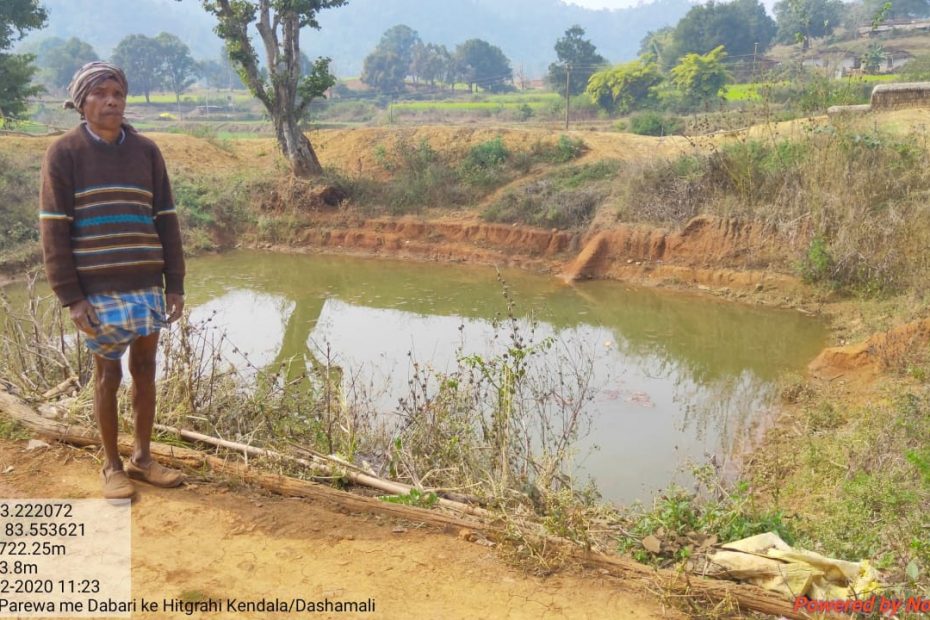 This is a success story of Kendla Balkha who resident of Parewa village in Shankargarh block of Balrampur district of Chhattisgarh. The district is in the northern plains region of Chhattisgarh which is characterized by slopy and undulating terrain. Kendla belongs to Oraon ethnic groups which come under Schedule Tribes. They have been staying in the village for more than 100 years and the family has 6 adults. Their main source of income has been agriculture and livestock which was not enough to meet the demands of the family.  The total land which Kendala has is 11 acres, out of which only 20% has double crops, and the majority of the land i.e. almost 9.3 acres is used for mono-cropping. He used hybrid seeds for paddy cultivation in this land and in a small portion of land near the local water canal he does wheat cultivation. Maize is done in the homestead land only for the consumption of the family.

The details of land (in acres) is as follows –

Process of formation of Farm pond – A step towards change

In August 2018, the planning of watershed activities for village development started extensively under Bharat Rural Livelihood Foundation’s High Impact Mega Watershed Project. This project aims at the creation of water harvesting assets under MGNREGA and capacity building of people so that the income of medium and small farmers can be increased. Community Awareness sessions and meetings were started by Sarguja Grameen Vikas Sansthan, a local Civil Society Organisation which has been working in the region with the vulnerable communities. These meetings were done at the hamlet level where individual and community plans were finalized through community participation. This is where Kendla and his family got information about MGNREGA and watershed principles. In these meetings, farmers were encouraged to form plans for livelihood security and enhancement.

Kendla says that after attending these meetings, he was motivated to demand for construction of a farm pond in his individual land which was later also approved by Gram Sabha. Few months later in February 2019, Rozgar Sahayak informed him that his plan for Farm Pond (30 x 30 x 3 meters) has been sanctioned and administrative sanction of 2.97 lakhs has been received. It was unbelievable for Kendla and his family as they never expected it to be sanctioned so soon, as per their experience such activities usually take many years for approval. With coordinated efforts from Kendla and other active workers enrolled under MGNREGA, work for the pond started after the layout was given by the Technical Assistant. The work was completed in five weeks on 5th June 2019 with a total cost of 2.55 Lakhs. The family also earned Rs.6000 in this work.

Sarguja Vikas Sansthan organised training on improved methods of agriculture such as vegetable cultivation and organic farming. It enabled farmers to cultivate climber vegetable such as Bitter Gourd, bottle gourd tomato and brinjal. Kendla participated actively in this training and learned about preparation of Jeevamrut and Haandi khad which are organic manure for improving production.

Farming in bunds and vegetable cultivation

Kendla and his family have been actively involved in cultivating vegetables and pulses on the bunds of their newly constructed farm pond. It also prevents cutting of bund soil into the pond during monsoons. He grew vegetables such as Okhra, chilly, tomato, bottle gourd, and bitter gourd, and mostly pigeon pea in pulses.

Additionally, chilly cultivation and wheat are being done in 40 decimals and 1acre respectively. The family earned Rs. 5,500 by selling all the vegetables.

Fish Cultivation as a means for additional income

Fisheries and aquaculture have been a traditional livelihood activity in most villages of Chhattisgarh, but famers were not able to generate much income and do it on a sustainable basis due to lack of water bodies. As water level started increasing in newly constructed farm pond, Kendla has put fish seeds worth of Rs 700 and is hopeful that rearing fish will supplement his income from agriculture. He is sure of earning Rs. 5000-7000 through this in the coming months. Also, it will act as supplementary nutrition source for the family.

Integrated model in the village

Thus, it is evident that farm pond has led to a significant diversification in livelihood activities and has also created sustainable livelihood options for the family. The irrigated and double cropping land has increased to 4.5 acres from 2 acres and family has started doing wheat, chilly, vegetables and pulses that gives them a cushion to shield them from market fluctuations. The income from fish rearing and vegetables will increase as family becomes proficient in the scientific methods of cultivation.

This change in livelihoods has also brought a significant change in thought process of community members that such a change is possible. They now understand that water percolation and storage is essential if profits must be earned from farm and allied activities.

Most farmers think that farm ponds lead to a decrease in the area of their land and hence resist the construction of farm ponds in their individual lands. This is major because they are not aware and conscious of the benefits of farm ponds. But Kendla’s experience has changed the perspectives of people and they are now understanding that more earning can be done if structures of water conservation such as Farm ponds are created in the villages. He says that if such small ponds are constructed in each farm it will lead to the availability of water for all crops and will also increase the productivity of the crops.

“ I am witnessing the change in income and cultivation methods adopted by my father and family which has motivated me to improve irrigation facilities in the rest of the land. I will do agriculture using improved methods so that total annual income of the family can be increased. It’s a better option than to migrate to other cities for work. “