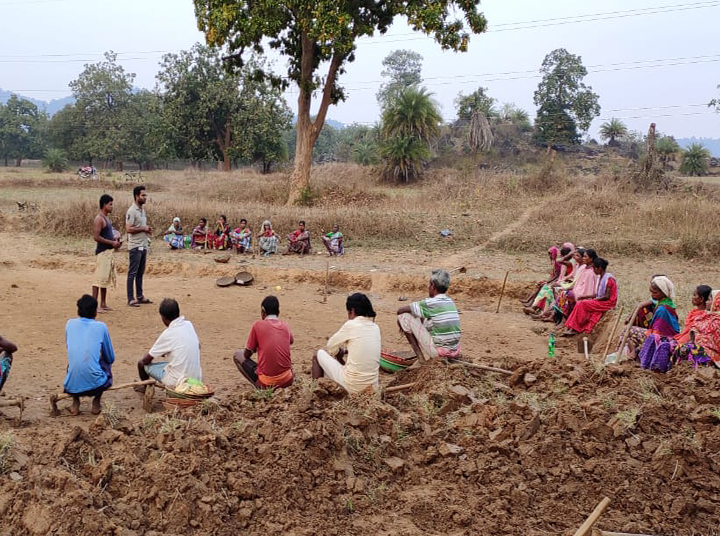 Context
Dantewada district in Chhattisgarh, given the context of its difficult terrains and presence of Maoists, is particularly challenging for any organization to work at the same pace as that in the rest of Chhattisgarh. Shamayita Math(SM), a CSO shouldered this daunting challenge by partnering with BRLF, in the Mega Watershed Project for Dantewada and Kuakonda blocks of district Dantewada.

Shamayita Math set up a team at Dantewada late in 2018 and set off in their journey with the project. The initial 6 months were never easy for the team. They struggled to get a foothold on many critical aspects – like knowing the community, building rapport, nurturing relationships with government, and so forth. End of the first 2 quarters and they had to make themselves content with 6 GP – level DPRs only. This left the team with big targets in the coming year (2019-20) – 30 GP level DPRs in GPs spreading across the length and breadth of the two blocks. This was a trying time for the team to be able to achieve the plans.

The Power of Staying Amongst the Communities

After a few rounds of planning exercises in the conventional way, in which team members would visit the field areas and try to call meetings, transact and cull out plans, it became increasingly clear that in this way the things are never going to be achieved within timeline. This compelled the team to switch strategies. They took a call which was far from easy – staying within the community and in all the villages where plans are to be prepared. It was indeed a tough call as some villages are in far-flung areas and even hard to reach, let aside staying there. But it had to be done as there was no other better way to get the planning exercises done in a better way. As a strategy, to get the first taste of staying in a village, amongst the community and get planning done in time-bound manner, the team, under the guidance of an experienced colleague, stayed together in a village called Masenar, a 20 Km drive from their team headquarters (Dantewada). It was sort of a learning experience, a hands-on training for all of them. The plan next was that after this on-field training, all the team members including cluster coordinators, technical experts along with CRPs of their respective areas would head their way to their own target Gram Panchayats to replicate the process. And then in the third round, even the CRPs (whom they call Gram Mitras), under supervision of cluster coordinators, would prepare plans on their own in one- or two-Gram Panchayats.

In the next couple of months, the team members would roam around their assigned villages, stationing themselves for about a week in each of these. They came up with a planning protocol in this way, which, before running the planning drive, mandates them to generally reconnoiter the area, meet with the PRI and other influential community members, share their plan, take their consent to run a planning event, make an assessment of safety and security and so on. The support from the influential ones proved critical to mobilizing the communities. The active assistance from some of the youths eased other necessary processes like collecting data, informing villagers for a meeting, assisting the SM staff with basic logistics, and so on. SHGs and village organizations in those villages again on many occasions provided the much-needed platform to discuss issues. It took about a week or two (depending on how big the GP is) to complete all the processes in a GP and generate enough NRM based plans for at least 2-3 years of implementation. Staying at the village and with the community provided the team with ample time, which otherwise they struggled to manage. It helped them win the communities trust and once it happens, the rest of the processes becomes much smoother.

Completing 30 DPRs this way was never an easy ask. That too in a terrain with challenges manifold more than other areas. Getting required amenities in interior villages was always a pain the team members bore with. Despite all these stress, anxiety and pain, the eventual feeling was of triumph. They ensured all the standard process of NRM planning like – preparing resource and activity maps, collecting basic household data, general hamlet-level information (like village demography, existing water bodies etc.), collecting land records, finding the right plot number and so forth. After about 2 months of marathon planning exercises, they were able to plan in 28 GPs (2 short of the target) generating land and water treatment plans worth 75 Cr with close to 4500 individual activities planned. Not just a mere list of activities to be planned but with all the necessary information like land records, consent letters, getting the plans approved in Gram Sabha and so on.

Challenges during and after

Settling oneself with the general climate of a little-known village, securing basic logistics, getting familiar or used to the unknown dialect (Koya Matta here), poor mobile networks are few of the challenges that the team members lived with during their stay in the villages. They also had to get over the phobia of Maoist story. Fortunately, it did not emerge as a big impediment during the days of their stay even though few of the places were notorious for extremist activities.

Just having a good plan is no reason to relax, our past experiences validate this. The challenge of getting such a vast number of plans sanctioned from the authorities is the next mammoth challenge facing the SM team now. If that is done, half of the war is won with only quality implementation and utilization of assets thus created as the tasks remaining.