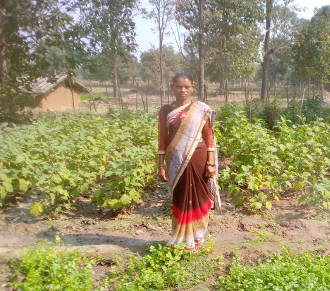 Chhattisgarh state is rich in forests, rivers, channels and other natural resources one of such districts is Uttar Bastar Kanker in the southern region. In Charama block, community members have been facing a severe water crisis for the last few years which poses a great threat to the livelihoods and even lives of people. But one incident changed the living standard of Markaatola Gram Panchayat’s villagers. In this village, a tribal family, Neera Kange and Sunil Kange have set a new example by using their own land for livelihoods which has motivated their other family members and community members to take up such activities in their own wastelands.

Like other medium-scale farmers, even Neera had enough land but was able to use only 40 % of the total land due to lack of irrigation facilities. She used this income for supporting her family’s needs, but due to the increasing size of families, the need to earn more was felt each day. She supported her husband in adopting new methods of livelihoods which led to better income and more financial stability for the family.

Neera has total land ownership of 6.5 acres out of which 5 acres is cultivable land and 1.5 acres was a wasteland. The runoff of rainwater was particularly very high in this region and a farm pond was created under Mahatma Gandhi National Rural Employment Guarantee Scheme in 2017 to reduce this runoff and increase water percolation. As the first rains came, farm pond proved effective in capturing rainwater, but it was not enough for fish rearing to earn profits. As the water percolated from the pond into the soil, the family thought of using this moisture for vegetable cultivation, this was very helpful for the family to fulfill their family needs. It is important to note here that the cultivating capacity of Neera increased from 2 acres to 4.5 acres.

After getting training on System of Rice Intensification (SRI), a scientific method of paddy cultivation conducted by Sehbhagi Samaj Sevi Sansthan, an NGO working with local community members in the region. She now grows paddy using 4.5 acres of land out of which 3 acres is done using SRI. In addition, the family is cultivating vegetables in 20 decimal land which was unused and fallow before. Though in the first year the profit was not as wanted but they didn’t leave hope and tried harder in the coming years. She used this income from paddy to get an additional borewell in her homestead land. Now she can cultivate paddy twice a year which was unimaginable a few years ago.

She also became president of the Women Cooperative Society which was formed by Sehbhagi Samaj Sevi Sansthan. Lac cultivation is one of the traditional livelihood sources for the local communities for many generations. Women of cooperative along with Neera took training on scientific methods of Lac cultivation and now she cultivates it on a regular basis. She used Ber and Kusum tree of 5 Kg brood Lac.

After seeing the impact of MGNREGA activities on her life and livelihood now she has given an application for land leveling and bunding for the remaining 1.5 acres of wasteland and she is hopeful that it will be sanctioned soon

Initially family didn’t get expected income gain from various livelihood options that they tried. They didn’t have enough feed for fish due to which fishlings didn’t grow well. Lac crop also suffered due to attack by pests and seasonal changes. But they overcame all these by support and by their will to learn and grow.

Impact on the life of family

This case study is an example where a women farmer didn’t loose hope and was successful in ensuring a better life for herself and her family. The paddy production in 2 acres was approximately only 20 quintals but after the formation of a farm pond in Kharif season of 2018 this production became 45 quintals, they sold this and earned Rs. 81,000. They sold fish worth Rs. 16,250. This money was used for borewell installation. In the 2019 monsoon, she cultivated paddy in 4.5 acres and gained Rs. 1,08,000 and sold fish worth Rs. 27,560 by selling 212 Kg. They started including vegetables in their daily diet, the family can earn Rs. 12,000 from 15 decimal of land. From Lac cultivation, 74 Kg Lac was cultivated from which she earned an income of Rs. 33,300.

Neera has used all the resources available in her village in an effective manner and at the same time augmented her daily income by land treatment under MGNREGA. She also is selling Mahua, Imli and other Non-Timber Forest Produce through cooperative and has become a role model for the other women farmers in the region. From Lac cultivation, 74 Kg Lac was cultivated from which she earned an income of Rs. 33,300.