Mohera Gram Panchayat comes under Magarlod block in Dhamtari District in Chhattisgarh. Dhamtari is one of the few districts where Kamar tribes reside. Kamars are one of the tribal groups which comes under Primitive Vulnerable Tribal Groups in Chhattisgarh as notified in the constitution. This was done to safeguard their rights and interests of these tribes. They are extensively dependent on forest and forest produce for their livelihoods and are considered as one of the most primitive communities. Though they have gained traditional knowledge on farming, medicine etc from their ancestors, they are considered illiterate and primitive by the urban society in general. Due to societal discrimination they neither fit in mainstream livelihoods nor are well accepted within their own villages. In Magarlod block, there are total 492 Kamar families residing in 13 Gram Panchayats.

Kamars are often excluded from a government schemes and many efforts of district administration to being them into mainstream were not successful. Most of the families have very low land holding and often depend on forest and daily labour work to sustain themselves and their families. Low irrigation coverage and lack of awareness of various schemes and entitlements make them more vulnerable and they get stuck in the vicious cycle of poverty and helplessness.

This case study is of Mohera Gram Panchayat where the livelihood of Kamar tribes was secured by registering them under Mahatma Gandhi National Security Act.

A welcome change for Kamars

Agrocrats Society for Rural Development (ASORD) is an Non-Governmental Organisation which is the implementing partner in High Impact Mega Watershed project. ASORD has been working in the region since 2018 and was observing the issues which Kamar community face specifically related to livelihoods. ASORD has been working in 5 intensive Gram Panchayats under the project for facilitating participatory planning of MGNREGA activities which will lead to increase in income of marginal and small farmers in the region. These five Gram panchayats are Birjhuli, Mohera, Singpur, Khadma and Pathar in which 52% of total households belong to Kamar tribes.

Mahatama Gandhi national Rural Employment Guarantee act which was enforced in 2006 and aims at providing employment security to rural households by providing 100 days of unskilled labour within or in proximity of their villages. In Mohera Gram Panchayat, Kamars were excluded from MGNREGA due to negative perceptions that no matter how much support is given to them they will not participate in MGNREGA activities. Also, because they never

showed interest in MGNREGA works in the past and even the reports showed the same It is also important to note that total upland in the village which is used effectively is 245.64 hectare which can be brought under treatment under MGNREGA.

In Gheekudia hamlet in Mohera, 42 Kamar families reside out of which some didn’t had MGRNEGA job cards i.e. they were not entitled to work in work opened in their villages. A camp was organised where all the excluded members of community who are more than 18 years of age were enrolled. This was challenging as they thought that it is not going to support their income in any ways.

ASORD team joined hand with local people and we held rigorous meetings with the community members. The team realised that the community had little knowledge about the benefits of act and on the works, which can be done at individual and community level. In community meetings, impact of MGNREGA on livelihoods was extensively discussed.

Community and team together prepared plan for all 42 households keeping in mind watershed principles and the planned purpose of the farmer. Plans such as individual plantations, NADEP, cattle shed, hatchery construction came up and need for various trainings such as carpentry, masonary also came up.  Focus of the planning was long term gains for the families and planning in a way that they can increase their income from their present resources. As these families understood the impact which will happen on their lives they started participating and many plans for individual plantations for fruits like mango, guava, kathhal, apple and ber came. Many families also showed interest in construction of NADEP tanks as there is high demand of organic manure in the village and nearby Gram Panchayats. This will also help in gaining skills which will enable them to meaningfully engage to lead a dignified life. Our combined effort has built a confidence among those people and narrative from surrounding people and administrative are changing now. Leaving the alcohol behind they are now participating in community NREGA works also which lead to change the perspective of many people that They no longer think that Kamar community members are alcoholic and do not aspire for a good future. This change has set an example for ASORD team members and community and is being replicated in other villages as well.

In Mohera, in totality total plan with budget of 140 Lakhs has been submitted for creation of 151 structures under MNGREGA till 2020. Total of 37,000 labour days are expected to be generated in construction of these assets in this and next financial year and total 250 hectares land will be treated.  Work has been started in Mohera and good participation is being seen from all sections of the villages irrespective of caste. 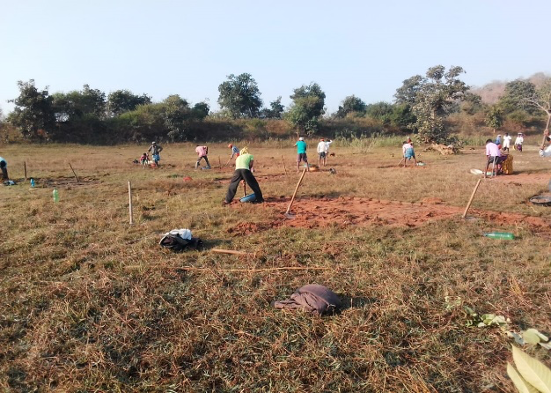 Separate water budget calculation has been done by the team to understand the water requirements for agriculture has been made. As per this, annual water requirement for all households is 104.3 Ha m, in this with assumption that 40% of water requirement is fulfilled from rains remaining water which is needed is 18 Ha m. Thus, the plans for water conservation have been made keeping in mind this water requirement. This approach is new as it considers the envisaged usage of the land by farmers in the planning process itself thus planning is not done in isolation but in accordance with needs of community members. This also increases ownership of communities and ensures better participation and maintenance of the created structures.

Along with this SHG members have also cultivated vegetables after receiving training on the trellis method of cultivation. Total 6 trainings were conducted on various technical aspects of trellis farming method and its benefits. A SHG member, Kamla Kamar understood the income possibility and did farming of bitter gourd and chickpea and earned Rs. 15,000 in the first crop. It’s a start which is acting as inspiration for the other farmers in the village.