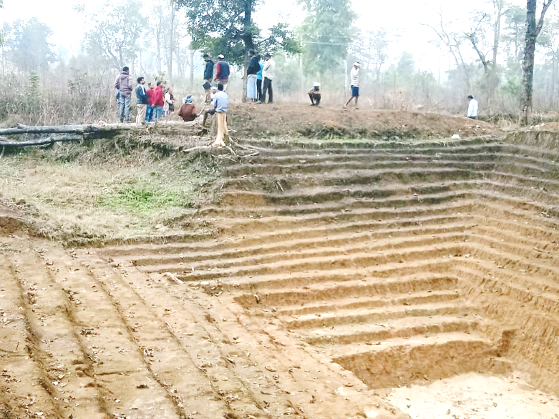 Chuhinala is a small hamlet of village Amanara in Bodla block in Kawardha district of Chhattisgarh, located inside the forest near banks of Chirpani reservoir. As per SECC 2011 data 96.99% of households in Bodla block are rural.  This forest village is located 33 km from the district headquarter located at Kawardha and is one of the few villages inhabited by Baiga tribes in Chhattisgarh. In total 107 households, 80% is of Baiga community and 20% belong to Agahria community.

Baiga tribes is one of the 75 tribes identified under the Primitive Vulnerable Tribal Groups (PVTGs) by the Ministry of Home Affairs, owing to their poor socio-economic conditions and low levels of literacy. The other tribes are Abujh Marias, Hill Korbas, Kamars and Birhors.

Despite tough living conditions the social structure and kinship is very strong in Baiga communities and are closely knit.

In the early times, Baigas depended on the slash, shift and burn method of cultivation this was not appreciated by other members of the community and they got the name Baigadia- those who destroy the land, of which Baiga is a short form. This was long ago and many things have changed since then. Today, most of the households are engaged in agriculture and collection and selling of Non-Timber Forest Products (NTFP), access to land and forest allows these communities to sustain themselves for some part of the year.

As these families are traditional forest dwellers they have received rights to cultivate the land and collect forest products under Scheduled Tribes and Other Traditional Forest Dwellers (Recognition of Forest Rights) Act, 2006. Most of the families do not have means to access any permanent source of irrigation during lean season and hence most of the agriculture lands turn barren in Rabi and Zaid season. The average land holding of the families is 3 acres and yearly income is Rs. 2000 from Non-Timber Forest Produce and Rs. 2500 – 3000 from agriculture.

The present data of agricultural productivity indicates that rice productivity for Kawardha is merely 1436.6 Kg/ha as compared to 2390 Kg/ha of India i.e. almost 60% implying that there is huge scope of improvement. This is because of reduced soil fertility, soil erosion and irregular monsoons.

In Chuinala hamlet, there are very few options for families for gaining regular income, and for most of the household’s migration is the last resort. Almost all the families migrate during the dry season from November to April in search of livelihoods in the nearby urban areas. These families rely on work in Jaggery farms in Kawardha and Pandariya which are 30- 40 Km from Amanara. They are mostly engaged in harvesting and cleaning in the process of jaggery making. On average per day, each member earns 120 Rs per day, thus in 6 months, each person will earn approximately Rs. 20,000.  Migration leads to social isolation and less social security, the access to facilities provided by the government is also reduced significantly. They are mostly underpaid and overexploited. Somehow, they earn enough to sustain themselves. In addition, they have to bear costs for living and sustaining in these towns which lead to additional expenses. Another unseen impact is that they get distant from their families and village traditions

Opportunity to work in MGNREGA is limited to only a few months and there are very few assets created in the village land. Out of 750 workers enrolled under MGNREGA 60 % belong to Schedule Tribes and more than 50 % are women.

In FY 2018-19, average days of employment that were provided to each household was only 67 days.

Way Ahead and Engagements –

Amanara Panchayat is one of Gram Panchayats selected under a watershed development project in Chhattisgarh which aims at enhancing income of 1,00,000 small and marginal farmers by treating land using ridge to valley approach.  In this project planning for MGNREGA works is being done using participatory methods and in lieu of watershed principles.

Samerth Trust is the Civil Society Organisation which is supporting MGNREGA district cell in planning and implementation of the works.  The team mobilised the community members in taking up natural resource management structures and ensured that most vulnerable sections take part in the process. Durable assets which will play an important role in water conservation are being prioritized. The plan was prepared in coordination with the community for farm pond construction, land levelling & bunding, well construction and earthen dam with the help of patch survey.

A file of each work was prepared, and resolution was passed by the Gram Sabha for further TS and AS by MGNREGA department. So, that the community will be employed in the MGNREGA work for land and water development work to ensure their livelihood in a better way.

At present work for farm pond has started under MGNREGA and 76 laborers got employment for 15 days which helps them to avoid seasonal migration and ensure 2 Ha irrigation for second crops. It is envisaged that this water can be used for cattle requirement and for drinking water for 28 families residing here. Data of households who completed 100 days of employment shows that it was 57 in 2018-19 and increased to 139 in 2019-20.

This is the first time that migration has stopped in this hamlet and people are hopeful that things will change for the better soon.

This case proves that severe problem of migration can be stopped if communities have confidence that they will get livelihood opportunities in their villages.