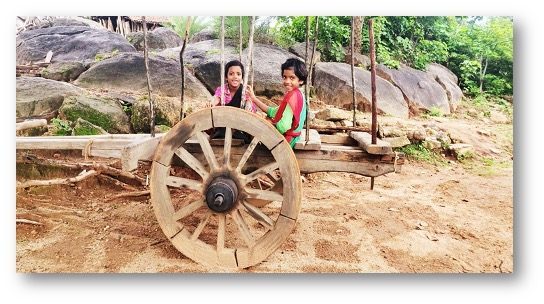 No one imagined, not even the people of Nishanharra, that one day they will sell such good produce of vegetables to market and people of other villages will visit to learn their experiences

Nishanharra – a small village in Narharpur block is situated in the lap of nature on the top of the hills. The place is irresistible with its stunning landscape of green trees and shrubs, the stretch of wilderness. Unfortunately, it is one of the very isolated and backward villages, situated 40 km away from block headquarter Narharpur and 37 km from district headquarter Kanker. The communication to the market, mobile network, and electricity facility is poor in the area. People of Nishanharra are extremely limited to the village, with less exposure to block, district and outer world. Nishanharra is the residence of 80 families who are dependent on agriculture and forest produce collection. They do traditional farming; cultivate paddy, pulses, and millets in an organic manner with minimal use of chemicals. Their farming is completely dependent on rain and none of the families have borewells in their land. They grow vegetables during monsoon, only for consumption, and rarely take it to market as it is never seen as a revenue generation opportunity.

In 2013, PRADAN mobilized the community and facilitated the formation and nurturing of women self-help groups with the idea of financial inclusion and women empowerment. As it was an interior and isolated village, this was challenging for the PRADAN team and it was also tough for the community to trust.

But nonetheless, women SHGs were formed and Rajendri Mandavi, an SHG member, played an active role in mobilizing and collectivizing the women of Nishanharra. The collectives were engaged primarily in saving and credit and boosting the confidence of women. In 2015, the Village level Organization (VO) was formed in Nishanharra with the support of PRADAN and Bihan. PRADAN facilitated the vision building of the village organization around strengthening livelihood, income enhancement, asset creation, nutritional sufficiency, and improvement in the status of life.

Agriculture in the village was at the subsistence level, people were majorly dependent on forest produce and labor work leading to the unsteady and poor income of the families. PRADAN team organized training around farm-based livelihoods to ensure better productivity and eventually to food security. Training were given on scientific methods such as Direct Seeded Rice (DSR), System of Rice Intensification, nursery preparation, seed treatment, and trellis-based creeper vegetable cultivation.

With leadership of Rajendri, and Raisingh and support of PRADAN, village organization and villagers prepared a village level plan under MGNREGA to create assets for water conservation.

In 3 years, 28 farm ponds and 6 dugwells were constructed in the village which only supported standing crop in kharif but also provided wages to families. A gradual increase in crop productivity was seen and income also increased.

Along with this, different livelihood options were also explored and adopted by villagers like Kadaknath rearing, fish rearing which gave them additional income of Rs. 20,000 and added to nutrition intake in the families.

In last Kharif season, 20 farmers were organized as a collective for tomato crop in winter to support them to gain an additional income of Rs. 10,000 – 15, 000. Rajendri was also a part of this group, earlier she used homestead land to grow some vegetables for household use. But this year she decided to cultivate tomato in 5 decimal land in her backyard.

She contributed Rs. 400, which was a huge investment for her and she was not very sure of the outputs that she will receive. All the farmers were provided with inputs and they prepared community nursery with support of PRADAN. Everyone transplanted the seedlings on the same day celebrated as Ropa Diwas and strictly followed the PoP as guided by Raisingh Mandavi.

Every time when the weather changed, diseases and pests attacked she was worried, but she followed the advice given. And finally, her efforts were fulfilled.

She was elated when she went for the first time to sell tomatoes, she made a profit of Rs.900. This was beginning of a new phase in her life as she was now going to market for selling and not for purchasing and she was proud of herself.  At the end of the harvest, she made Rs, 12000 apart from consumption at her home. She felt accomplished.

She says, “I never thought that this small piece of land can give me such a sum of money. Next season I will again go for it.”

In Rabi season she again cultivated tomatoes, in 10 decimals of land with support of dugwell constructed under MGNREGA.

Tomato is a high risk and high return crop. Like Rajendri, 15 out of 20 farmers earned as average income of 8000 Rs. from 5 decimal of land which is a good return.

Hearing about success of farmers, other farmers and SHG members and VO leaders also visited Nishanharra during Kharif to see and learn how people from a backward area, with lack of resources, lack of exposure have achieved additional income and secured their livelihoods through MGNREGA. Such exposures have further boosted confidence and excitement of women collectives and farmers of Nishanharra.