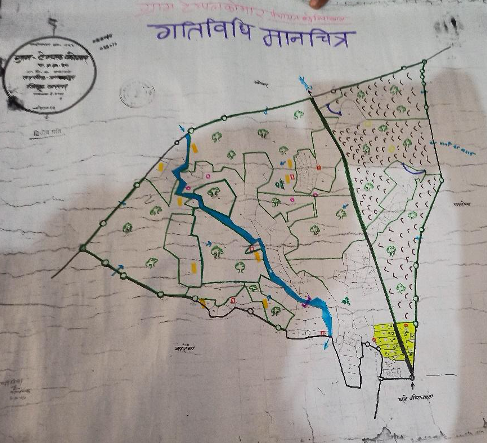 Women and men in Bakawan block of Bastar district are looking forward to construct water harvesting structures and get employment under MGNREGA in the coming year. They are excited to share about the impacts water availability will have on their village economy. As SECC data, 2011 Bakawan block has 73 Gram Panchayats, 114 villages with 36,595 rural households. 13 Gram Panchayats have been taken under High Impact Mega watershed project, which is a joint initiative by CG government, BRLF and CSOs.

Tempalpara Komar village under Badejirawal Gram Panchayat has limited sources for irrigation during rabi and summer seasons. Previously people had access to water from Chitrangi nala throughout the year but now due to erratic and low rainfall, the river dries up before October. Gram Panchayat has more than 250 households and a total unirrigated area of 300 hectares. Villagers share that there are very few borewells in the entire village and thus irrigation needs are largely unmet. Thus, a huge patch of land remains unutilized, barren, and dry for the majority of the year and even in monsoons most of the water flows at high speed. Thus, water retention is low and soil erosion is high and continuous. Various efforts of the community members to use this land effectively, such as cashew plantation, vegetable cultivation have gone in vain due to lack of water for irrigation. The situation was not so bad before recalls, Narsingh dada as rain used to be regular and for longer periods.

Gobru dada, an active farmer from village shares that water availability is directly linked to migration and if more water is available it will enable people to use their land more effectively and will also reduce migration significantly. Most of the young boys travel to Hyderabad and other places in Andhra Pradesh in search of livelihood activities and return to their villages only in monsoons. Thus, water scarcity is forcing people to migrate while the available natural resources of their villages are being degraded year after year. Some structures have been completed under MGNREGA in the past, but they were not made in continuous patches and also not made by involving people, thus not bringing significant impact on the landscape.

To change situations, this year a community-based watershed planning was done to treat the land and decrease the runoff speed of rainwater.  The team of Bastar Sewak Mandal (BSM), the CSO involved in the project facilitated this planning process and also built capacities of the ground level functionaries.

In Templepara, the community was initially disinterested due to delay and loss of wages that has occurred in the village a few years back, but with continuous motivation and training conducted by BSM they agreed to plan and complete the structures.

The initial mobilization was started by sharing the objective of the project, principles of watershed management and the desired outcomes with the Panchayati Raj Representatives. Subsequent meetings were conducted with SHG members and active farmers and planning was done to increase water storage capacity in the village area. Post planning meetings a transect walk was conducted to see if the proposed structures are suitable for the land or not and the plan was finalized, and a similar planning process was adopted in Badejirakhal village.

During the planning more inclination of the community was towards farm levelling, farm bunding and creation of ponds. Under the project, training of Rozgar Sahayaks and Technical assistants has also been conducted on various water harvesting structures, the terrain on which they are constructed and their impact on soil erosion and water percolation.

In this planning SHG members and PRI representatives played a major role and focus was on watershed principles and land treatment. Active participation from community members ensured that plans were realistic and as per the desired land use.  Badrika didi, shares with a lot of happiness that this was the first time she and other SHG members were asked for their opinions and they got a chance to participate.

Overall, a plan for the treatment of 168 Ha has emerged for the next 4 years which will harvest 242489.80 cubic meters of water. This plan has an approximate budget of INR 1.3 Crore and will be implemented in coordination with the MGNREGA block team. This approach of planning has made community members excited about the possibility of becoming water and income enough for the entire year.