Patinaikras is a tribal village located at 25 Km North of Sukma district headquarters and 5 Km Northeast of Chindgarh, the block headquarters. Mariya Gond and Dhurvas are the two tribes inhabiting the village. Like most other villages in the insurgency torn Sukma, Patinaikras too is a testimony of a struggling lives of tribal communities. Deprived of the wherewithal to earn a decent living, villagers would often migrate to the neighboring Andhra Pradesh and Telangana in search of job opportunities. The state of agriculture is dismal, hardly providing the families more than 6-7 months food security and practically no cash return. This data is in contradiction to the fact that the per household availability of land is quite high (in the range of 5-20 Acres, https://bhunaksha.cg.nic.in).

Under the aegis of BRLF, in the last year, Samarthan started the Mega Watershed Project in the blocks Chindgarh (Intensive block) and Sukma (Non-Intensive). Patinaikras was shortlisted as one of those Gram Panchayats where watershed DPR would be prepared in the first phase. Few months of DPR preparation work in the village, the Samarthan team was able to build a good rapport with the villagers, especially those in the hamlet called Patel Para. It later selected Patel Para and the neighboring hamlet Kokartong to carry out Kharif agriculture-based interventions too. The interventions planned were line transplantation of paddy, line sowing of Maize and vegetables cultivation in the homesteads.

Although in the beginning the expectation was to reach out to about 50 households in the above two hamlets, but there was a fall in participation especially in the vegetable cultivation as it entailed some initial investment on the part of the farmers. Eventually 30 Farmers participated in the agriculture interventions out of which 13 did vegetable cultivation. These 13 farmers had never grown vegetables in their homestead land in the Kharif season. The Samarthan team convinced them after a lot of persuasion and moral backing. 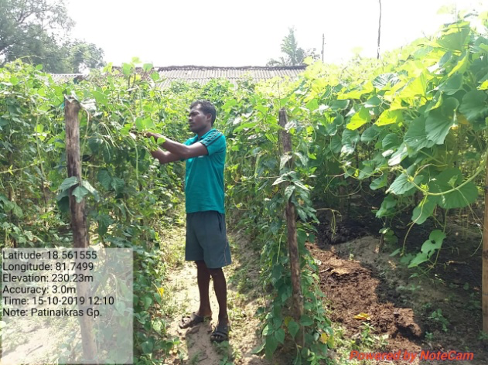 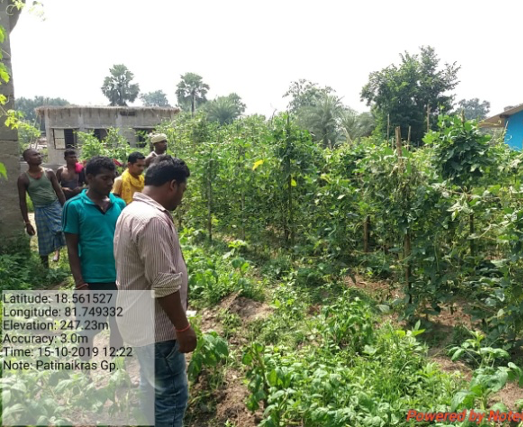 During the cultivation phase, despite a few glitches like heavy rainfall, challenges in pest management etc, the families have reaped good benefits out of this venture.

As the sale are still on and is expected to continue until early November, the returns will see a further rise by twice or thrice of the current figures. This case bears significance in the fact that this was the very first occasion when the above families have successfully grown vegetables in their lands, thanks to the training and handholding support from the Samarthan team.