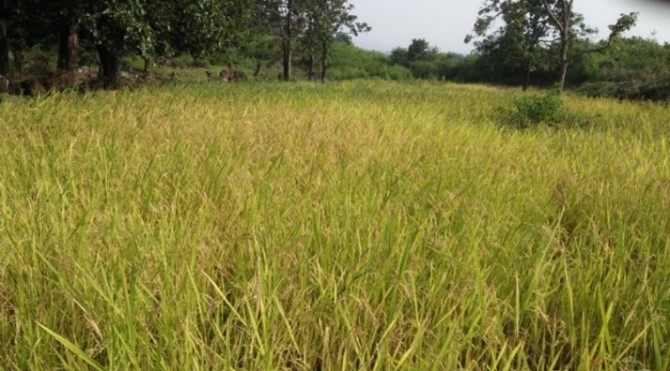 This case study examines the changes brought in life of Kondaram a farmer from Chermunda Gram Panchayat in Surguja district of Chhattisgarh. In Lundra block, the average land holding of farmers is around 1 acre which often causes food and livelihood insecurity to the family members. The change in lives of such farmers can be brought only by changing the irrigation scenario in the region i.e. by making farmers less dependent on rainfed agriculture and ensuring more water for the lean periods. This is precisely one of the major objective of High Impact Mega watershed project which is being implemented in Chhattisgarh and Chermunda Gram Panchayat is one of the intervention villages in Lundra which is an intensive block under the project.

Pahadi Korwa tribes are amongst the Primitive Vulnerable Tribal Groups of Chhattisgarh who have very little access to resources and entitlements. They mostly have very less landholding and permanent assets and depend on agriculture and other labour work for income. As they live below the poverty line, development interventions should aim at making them independent also their capacities should be built around various farm and non farm livelihood activities so that they can earn stable income throughout the year. The Forest Rights Act, 2006 gives exclusive provisions to these tribes to support them and bring them out of poverty.

Kondaram’s stays with his youngest son with total 5 family members. He is a beneficiary of Pradhan Mantri Awas Yojna but its completion looks dicy and for now, he stays in a Kacha house with 2 rooms. This house has single-phase electricity connection and works only when there is supply in the village. Kondaram’s ancestors were landless and were given 10 decimal land for construction of the home and later were also provided with the lease of 1.5-acre forest land for farming. This along with labor work and forest produce collection helps families in generating income to meet the needs of the family.

During monsoons water would pass with very high velocity as there was slope and the soil deposition led to unused land patch. Even if they did paddy in this upland, the output and outcome was really low as it had slightly rocky terrain.

As one of the beneficiaries in the High Impact Mega watershed project, Kondaram’s family participated in the community-based planning exercises and realized that there is a possibility of better cropping through some land development activities. Land clearance and development activities were undertaken in one-acre land through MGNREGA and earthen bunds were also created so that the rainwater seeps in the land and doesn’t flow down. The overall budget of the work was 48,000.

In Kharif 2020, when the entire country was struggling with COVID 19 pandemic Kondaram’s family had access to additional income from the paddy cultivated in the levelled land. The crop was very good and the family was satisfied with some food security it will bring in their lives. Exact outcome data will be available after harvesting and cutting.

In addition they are planning for vegetable cultivation with help of Chaupal members, which is a CSO working in the region with the rural communties in their backyard in 2 decimal of land.

Kondaram plans to do Goat rearing in the future to increase the income of the family. At present only one crop is being taken but the family has planned to try pulses as rabi crops ( October to March ) and see how the produce is. This is a small change but a good start.