Creation of Seed Banks for the conservation of indigenous seed varieties 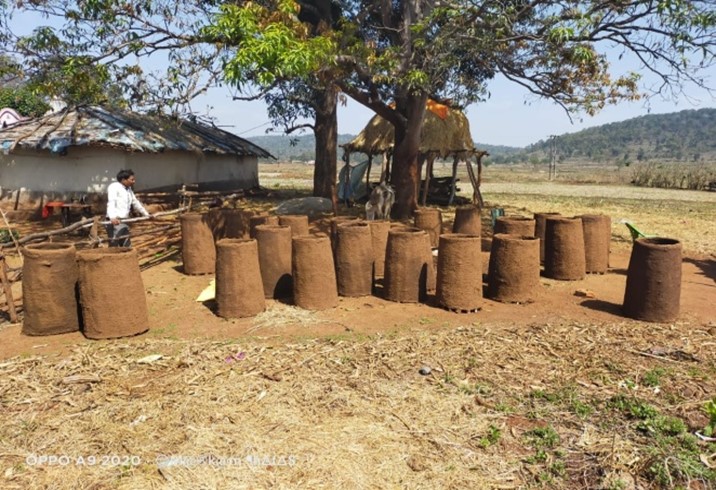 “Seed bank” is not a new concept for rural regions and for a long time there is a tradition of seed distribution amongst their relatives which is still followed by some.  Usually, two methods are followed – “Cherchera” is a local festival celebrated after harvesting of Paddy crop whereby harvested paddy seeds are collected by regional groups and kept for religious ceremonies whereas “Bijaahi” is a simple exchange of local seeds within relation or among village people and in return have to give double the quantity in the next season. Such traditions often contributed to the conservation of the local variety of seeds, but after the introduction of Hybrid seeds in the rural areas, 80 % of the farmer started using them which led to the fast disappearance of indigenous seeds from the villages.

To revive the indigenous seeds from villages, Samerth Charitable Trust with support from Bharat Rural Livelihood Foundation (BRLF) has taken an initiative at Bodla block of Kawardha district. At Chilfi Cluster a “Seed Bank” was established in Shivnikala Gram Panchayat after organizing a cluster level meeting with gram panchayat members, SHG members, members of Farmer Field School (FFS), and Producer Group (PG) members. An old vacant building of gram panchayat is being used for procuring and storing indigenous seeds of paddy.

A Management Committee of the seed bank was formed during the meeting and a member from all Gram panchayat of the cluster was selected. Proceeding for management committee registration and its bank account opening, as a registered entity for supplying indigenous seed in rural areas.

Promotion of “Organic Farming and Indigenous Seed” is being done so that every farmer grows local varieties of cereals, pulses, oilseeds, and vegetables. The management committee of the seed bank will be responsible for procuring and distributing the indigenous seeds among farmers and facilitate everyone for growing and increasing the area. A traditional method of seed drum (made from bamboo and mud) was made by village people for procuring different local varieties of paddy seeds in the Seed Bank.

Last year, team of Samerth and community members procured 4.5 quintals of indigenous paddy seeds of 29 varieties from different villages. And this Kharif season, they distributed it to farmer for cultivation and have to be returned back as per the norms of “Bijaahi” to seed bank. All the records of the seeds distributed and received was maintained by the seed bank management committee in different registers

Zila Panchayat C.E.O., Shri Vijay Dayaram, visited the Seed Bank and appreciated the initiative taken for reviving the indigenous seed by farmers committee and want to replicate the “Seed Bank Model” in all four blocks of Kawardha district