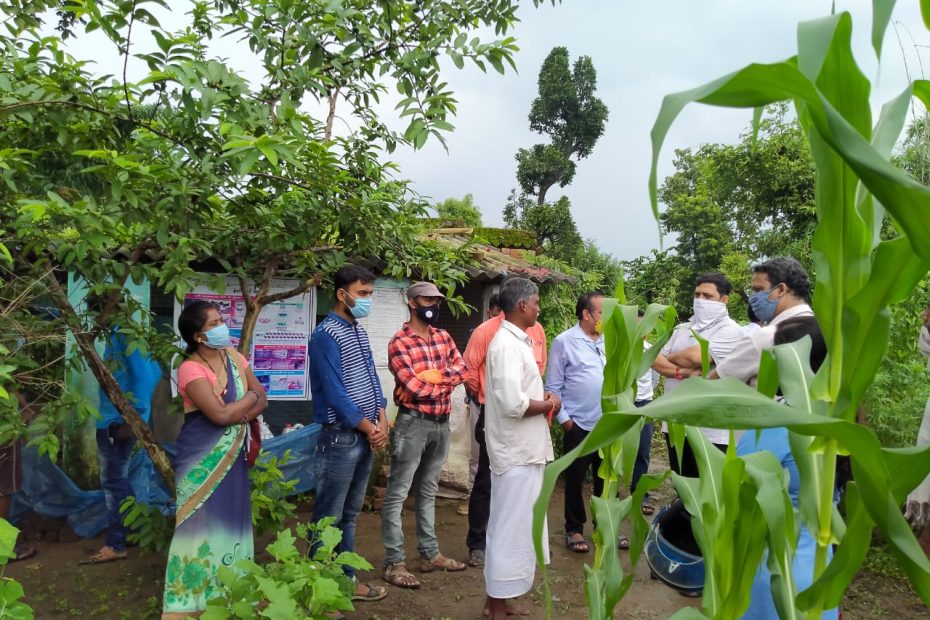 Kapot is a Gram panchayat of Pali Block under Korba district, where land is mostly undulated and sloppy amidst the hills. Mostly farming is single crop and is rain fed, with paddy as major crop. In the current situation, the increasing costs of cultivation is the biggest threat to the livelihood, where profits are not enough and satisfactory. As we all know, our country is an agriculture based economy and special focus is needed to improve the productivity and irrigation facilities. Shayamlal Nirmalkar is one of those farmers who adopt improved agriculture through trainings and changed his fate with agriculture. Instead of traditional Small farmers like Shayamlal have an alternative called integrated farming which reduces risks and increases income

Shayamlal’s total agricultural land is 0.95 acres a major portion of which is non-cultivable. This along with lack of water for irrigation increased his problems year by year. As the family size grew it become more and more difficult to sustain and ensure the needs of the family are met. Shyamlal and his family always manage some extra income from labor work and from MGNREGA. One of the options he came across was goat rearing, but he gave up this idea as he had no prior knowledge or experience in this

Communication with CARMDAKSH and their role

When CARMDAKSH went to Kapot for INRM planning under the High Impact Mega watershed project being implemented with support from BRLF, they also met Shyamlal. As his land was not suitable for developing any watershed structures, he felt disappointed. Later during the field visit and transect walks and discussions with family, integrated farming emerged as an option for increasing income on a sustainable basis. Goatery and poultry seemed like exciting options for him.

He started white bird poultry rearing in December 2018 with the help of the NFI & the THFI project but wasn’t able to spread it up due to a lack of capacity and knowledge on rearing processes. CARMDAKSH started training on livelihood strengthening activities on improved agriculture, goat rearing, and poultry to all the farmers in the region. In addition, he was motivated to use the additional income generated in the creation of Wadi (orchard) in his land.

Due to his keen interest in work and his helping nature he was motivated by CARMDAKSH to establish a Field Farmer School in his village.  Shayamlal was overwhelmed with this opportunity and he started with the construction of informative flexes in the intervention areas. His efforts are being recognized at the village level and good practices are being replicated by other farmers with support from CARMDAKSH. A seed bank has also been established in the locality which focuses on conserving indigenous varieties.

It is stated previously that Shayamlal initiated poultry but unable to flourish; nowadays he is rearing almost 300 chicks batch – 4 times a year and using the waste as organic fertilizer in his wadi vegetable cultivation. This improves soil health and leads to the production of fresh vegetables for his family.

Shayamlal also started goat rearing with 5 goats during this period and is progressing slowly. Now he has 10 goats and has sold 7 to get Rs. 18,000 during the last six months. He has established a proper habitation structure and also proper vaccination twice a year with support from CARMDAKSH.